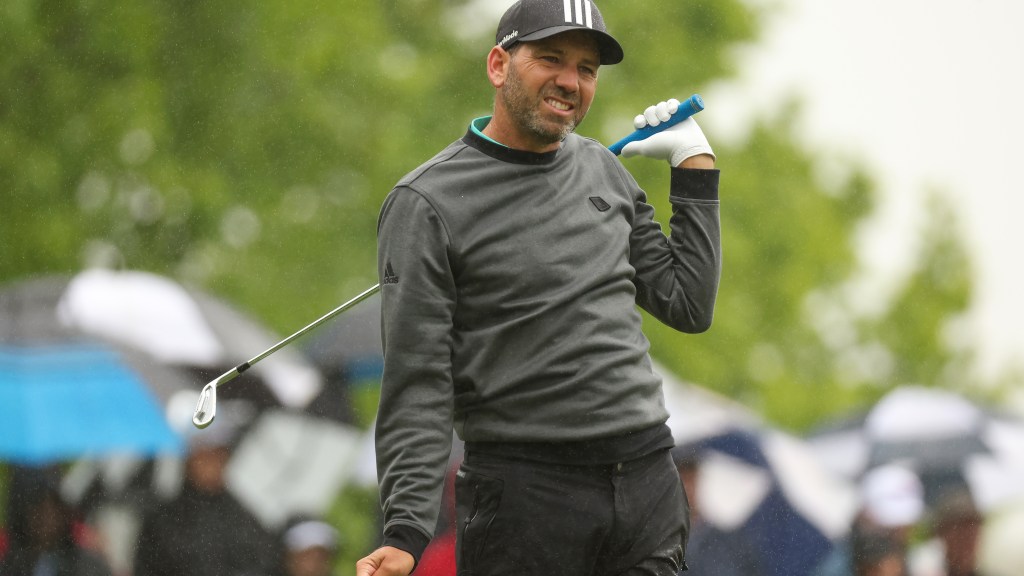 Somewhere deep in the bowels of LIV Golf’s budget, well below the lucrative prices and exorbitant tips to ignore the free, closer to the paltry media buys to induce velvety coverage, there should be a post for change facilities diapers to be used by the increasingly infirm or infantile people who will occupy its changing rooms.

Take Sergio Garcia (“please”, says Henny Youngman). Garcia is not entirely a one-dimensional gauge. He can be lovable and funny at times, but even at 42, he’s proof that age and maturity are mutually exclusive. In the first round of the Wells Fargo Championship on Thursday, he again demonstrated his tendency to treat every inconvenience as an injustice.

The unlucky official must have felt like a bartender who refuses to serve a belligerent drunk to hear that he is taking his custom elsewhere.

The departure from the PGA Tour that Garcia referred to is believed to mean he plays in LIV Golf’s Saudi-funded sportswashing tournament series, which will launch next month in the UK. He didn’t confirm it himself – Garcia avoided the media after his first and second rounds – but his agent admitted he had requested the required release from the PGA Tour to play the first Saudi event near London.

Competing there does not necessarily mean breaking with the PGA Tour. Several members will be going since the Tour long ago set a precedent allowing money to be taken overseas. Playing the second Saudi event July 1-3 in Portland, Oregon would be another matter. The tour policy does not allow waivers for events held in the United States. Members who challenge this rule to play in Portland explicitly choose sides. Disciplinary action and protracted litigation would likely ensue.

Garcia checks out all the common player traits associated with the Saudi bid to hijack professional golf: the best days are in the rearview mirror, accomplished everything that seems likely in major leagues, not playing well enough regularly to benefit from an increase in purses on the PGA Tour, underappreciated enough to reap fan engagement bonuses, blessed with a strong sense of entitlement and plagued by petty (mostly imaginary) grievances.

Since blasting his way to fame in 1999, Garcia has earned $54 million on the PGA Tour, but his career has been defined by petulance. To cite just a few examples: throwing his shoe into a gallery; spitting in a cup, leaving behind the loogey to those unfortunate groups; upsetting the fans (I’d forgive him for that – Bethpage Galleries was obnoxious); blaming bunkers and unseen forces for his 2007 Open Open defeat at Carnoustie; apathetically apologizing for a racist crack about Tiger Woods; being disqualified from the Saudi International in 2019 for intentionally damaging five greens by tomahawking his club.

Consider the latter for a moment: his conduct was once considered irrelevant by the Saudis.

Garcia shares another attribute with his peers who also fondle bonesaw enthusiasts a lot: their absence from the PGA or DP World Tours would hardly be noticed. It is the disconnection at the heart of Saudi seduction. The sums offered by LIV Golf convince players that they are among the elite, but the simple act of entertaining the opening is to recognize that they are not, that their ability to compete with the best in the world is greatly reduced, that they will trade for a potential Hall of Fame spot. for a secure place in the Hall of Shame.

There could be a little more respect for honest players who admit to being money-driven and indifferent to morality. Some, but not many. It’s always relevant what players are willing to do for that money, which is to lackey the public relations agenda of a reprehensible regime. But instead of transparency, we get abhorrent dithering as they attempt to portray greed as an act of public service.

In an interview with Sky Sports’ Jamie Weir, Lee Westwood admitted the Saudis had problems – he almost said ‘problems’ before making up for it – but insisted they were trying to improve. He has not detailed what he thinks these problems are or provided evidence of the government’s progress, which would be news to human rights groups monitoring his abuses. Westwood went on to suggest that the criticism directed at The Kingdom stems in part from discomfort that the pace of change is too fast.

Whatever compensation package Westwood negotiates, hopefully there will be a bonus for his willingness to degrade in public while shoveling from that pot.

It is absurd to think that the future of the PGA or DP World tours would be impoverished by the loss to LIV Golf of Garcia and Westwood, or any of the others planning to encourage the Saudi sportswash. It could even be considered positive detritus cleaning. Whoever embarks on the coming weeks, it’s worth noting that both tours created the environment that spawned this – the DP World Tour by brazenly welcoming the tin-pot dictatorships into its schedule , and the PGA Tour by operating a nanny state that protects the public image of players. of the consequences of their conduct, all in service of an Orwellian mantra “These guys are good”.

It took the Crown Prince to finally expose the least admirable characters in professional golf. Cynic fans may want to applaud his willingness to take them from us.