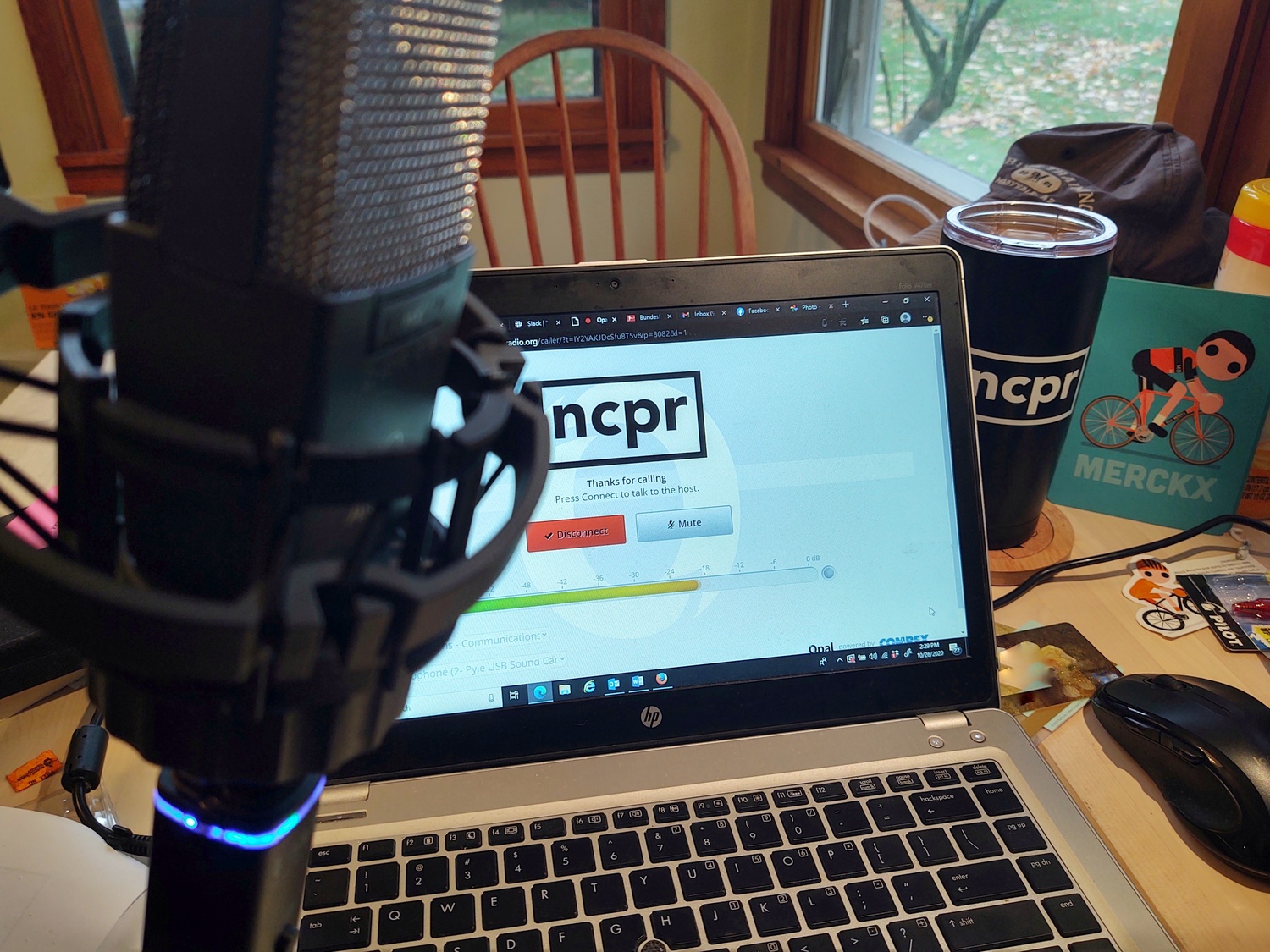 Because we are in the field of communication

Thanks to the miracle of technology, you would never know this studio setup was in my dining room. Unless, of course, you’ve seen it. Photo: Mitch Teich

The live fundraiser that just ended was a complicated affair. With the BA.2 variant of Omicron (“Omicron vs. the World Crime League”) circulating in the community, we are making full use of the NCPR’s ranged capabilities. The goal: get two weeks of intense on-air work without having to force my 13-year-old son to serve as Morning Edition’s host.

We have three studios from which we can create programming at NCPR. Two of them have adjacent auxiliary studios, so that two announcers can work together, separated by a wall and a window through which they can – through a complicated series of hand gestures – make it clear that they are not have no idea what the other is trying to communicate.

If that wasn’t enough, we can bring in advertisers via the internet from their dining rooms and kitchen tables, where they can report the news, give weather forecasts or help with fundraising live, all while dripping hummus on their mic.

It’s been that way for many of us for over two years, of course. The start of the pandemic in 2020 – in addition to being terrifying – has been like a great adventure in creative thinking about work. Hey, wouldn’t it be amazing if we could run a computer chip/shoe/light bulb company from people’s game rooms? Sure, the people who make and ship things haven’t been able to work from their playroom, but won’t they have some great stories to tell?

Luckily, we’ve learned a lot over the past two years about remote radio. During our spring 2020 fundraiser, we thought it was important for studio animators to see their colleagues broadcasting from dining rooms and closets. So we connected the announcers via Zoom, which meant the person in the studio only had to pay attention to the control panel, the instant messaging app, the weather forecast, the NPR audio stream, the audio stream from the other advertiser and at the video feed of the other advertiser. We abandoned this practice fairly quickly, much to the relief of overworked studio announcers and unshaven remote announcers in pajamas.

Today, however, the world – including NCPR – is in this “hybrid” work business. Communication apps have gotten better in a few years, and we’ve gotten better at using them. (My fake Zoom background is way better than he was in 2020.) We can have meetings with six people in an office, two in their car, and one in their living room, pretending he’s not watching the Mets game.

The problem is, with some sort of return to the office, it’s hard to switch between office and work-from-home mindsets. I was on the mic in my dining room studio earlier this week when Monica Sandreczki messaged me on Slack asking if I was okay to go on air after the next story on Northern Light . I nodded and went back to checking my notes. Then she texted me again. Finally, she messaged the fundraising channel on Slack, as if she couldn’t see me nodding through my computer screen.

So we still have a long way to go, communicating between all our radio studios. Fortunately, we were able to communicate with you. You came to help us raise over $300,000 in less than two weeks of on-air fundraising. It makes a huge difference to us and we are grateful for that. And if you haven’t contributed, it’s not too late to help ensure a bright future for NCPR. Take a moment to donate at ncpr.org/give. Gratitude will be real, even if the Zoom background is fake.

The former retail giant is near extinction | News, Sports, Jobs