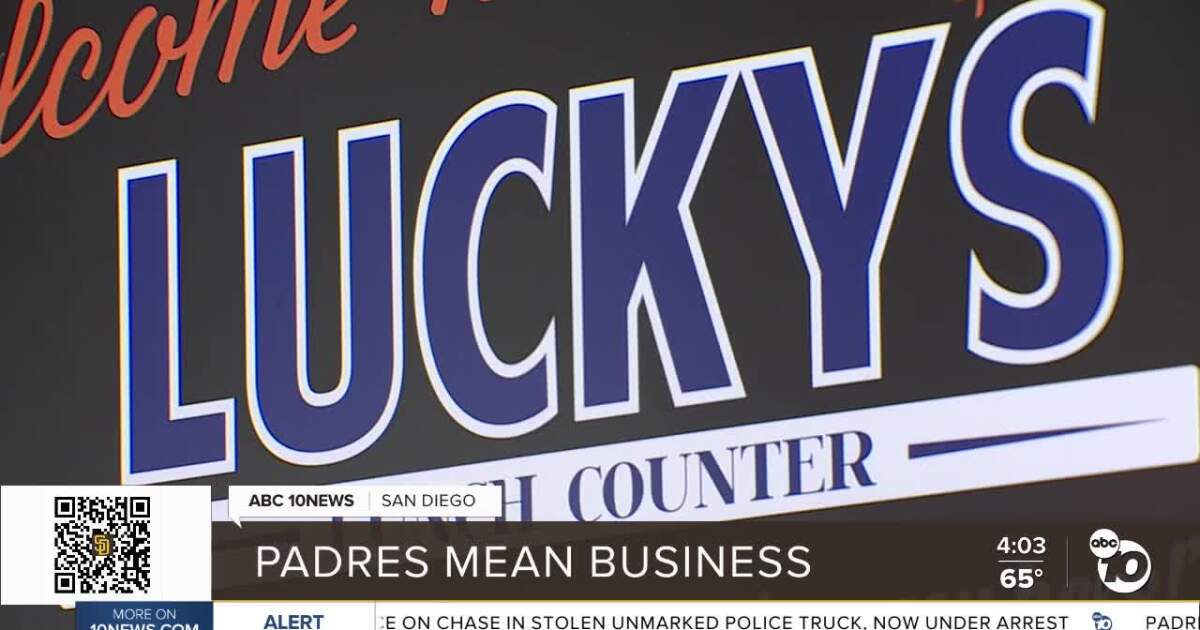 SAN DIEGO (KGTV) — And on opening day, it’s not just fans who are excited, but local businesses who are expecting record sales.

All day Thursday there were swarms of faithful brothers on J Street. That means constant foot traffic and fans looking to spend.

“The exposure is great, the brand is great, and the Padres are great,” shares Ryan Dehu.

The owner of the Blind Burro, which is a block from the park, is hoping to capitalize on today’s home game.

“A month of preparation, from training new staff, hiring 10-15 new people just for baseball season and making sure they feel comfortable with the volume we’re about to to do,” says Dehu.

The restaurant opened new bridges, extended its opening hours and consolidated its menu. He expects sales to be at their highest, “It’s going to be there with the Garth Brooks concert which was a record for us.”

Across the street is Lucky’s Counter. The chef, Ivan Munoz, prepares the food for the sandwich shop and its partners, Moonshine Deck and Moonshine Flats.

“We’re even open later than usual, just for today,” he shares. “So it’s going to be a lot of fun.”

They have been working with these crowds for 10 years. Munoz says Thursday they offered $3.94 promotions for fish tacos and beer. He hopes they sell out, “A small venue like Lucky’s is, we still do about three times our normal sales on a day like today easily.”

While these companies reach out to fans outside the stadium, they hope to celebrate a win in a number of ways.

“Everyone is on the same team today,” shares Dehu. “Everyone is a Padre fan. The staff are happy, everyone has a little extra money in their pockets today, a smooth afternoon.

For some stores like Off the Bench, Thursday will be their first day of sales in the baseball season.

“We just opened at noon and we’ve already seen a ton of foot traffic, so it can only get better from here,” shares owner Anthony Binno.

The shoe store has only been open for four months and has already received inquiries from Friar Faithfuls.

“We are currently working on a collaboration with Padres colors for our Off the Bench t-shirts,” Binno explains. “Who will be there in the next few weeks, we couldn’t get them before the game but you know we will get them soon.”

They hope the sneakers will sell out on the shelves.

Across the block, Throw it!, hope their axes keep flying.

“We are usually very busy after games,” shares owner Negar Sarbaz. “It’s a little slow at first, but it all depends on how the Padres are doing, either they come in after the 5th inning or they come in the finish.”

Throw it! has been open for 3 and a half years. They offer $10 discounts for ticket holders to redeem before or after games.

“There are going to be a lot of people for a lot of popular games,” Sarbaz says. “Like the Dodgers and everything was already sold out.”

And the sale is what they’re hoping for, as revenue from just a home opening could impact the year.

“In the off season it’s tough, in baseball season we do really well and it pays for half our year and that’s a lot,” she explains.

These businesses hope that the surge in customers they see on Thursday will continue throughout the season.

“We’re just excited for all the foot traffic at baseball games,” Binno says. “You know, glad to have them back in town.”