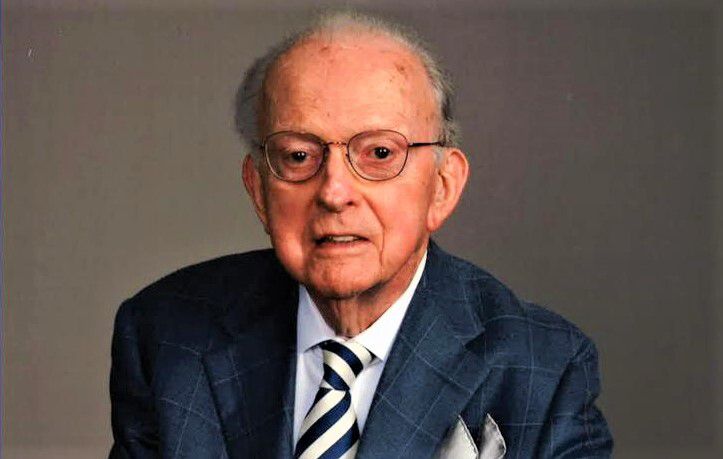 Fred Patterson, former publisher of Denton Record-Chronicle and a force in Denton’s art scene, dies at 92

Long duration Denton Record-Chronicle Editor Emeritus Fred Patterson is remembered by friends and family as a man of two careers.

He established a reputation in Denton as an advertising salesman and newspaper publisher. His legacy, however, will also be that of a man whose support for the arts, history and economic growth helped plant the seeds that helped Denton flourish in a cosmopolitan county seat proud of its honors from Dallas and Fort Worth.

He went from advertising salesman to Record-Chronicle to become publisher and eventually co-owner with his wife, Patsy.

Patterson was considered a gentleman and mentor by the publicity and reporting corps of the Record-Chronicle. Even in retirement, Patterson would walk to downtown newspaper offices wearing a blazer and the occasional bow tie. He kept his touch light when his son Bill Patterson took the reins, but still reportedly volunteered to connect little reporters with the names and contact details of sources who could shed light on the city’s civic life.

Fred Patterson was best known in the Denton arts community for the hours of phone calls and shoe leather he devoted to leading a number of community initiatives. He was part of the group that founded the Greater Denton Arts Council, an agency that eventually maintained two facilities, developed arts programs for all ages, and provided grants to smaller nonprofit arts organizations.

His crowning achievement was leading the committee that raised $2 million for a fundraising campaign to revive the Campus Theatre, a bustling movie theater in its heyday that lay dark until Patterson led the charge to bring it back to life. to space. The effort transformed the Campus Theater into Denton’s downtown belle and performing arts space that housed non-profit offices, rehearsals, performances and film festival screenings.

Mike Barrow, managing director of Theater Denton, the resident company that operates and maintains the Campus Theatre, said Patterson was part of a core group that dreamed of a city that would not be a dormitory community but a living cultural center .

“Anyone who was involved in this campaign, the first name they would bring up would be Fred Patterson,” Barrow said. “It just wouldn’t have happened without another name.”

His contributions to the development of the arts at Denton were once recognized by former President Ronald Reagan, who wrote, “If there is one thing that shines in the list of all you have done for the visual and show at Denton is devotion. to your community. How heartwarming to meet a dedication like yours and to hear what the cultural climate can do for a community and for the nation. Thanks very much.

He graduated from Decatur High School and earned a business degree from the University of Texas in 1952. He came to Denton in 1955, where he joined the sales department of Moore Business Forms. He married Patsy Cross on September 6, 1958.

Patterson began his career at Record-Chronicle in the advertising department in 1958 and became advertising manager in 1960 and assistant editor in 1970. After editor Vivian Cross retired in 1986, Patterson became editor.

He retired after the paper was sold to AH Belo Corp., publisher of The Dallas Morning Newsin 1999.

Patterson built his reputation by dedicating many hours to causes he knew would outlive him, friends said.

The Pattersons saw the renovated Campus Theater open in the early 1990s. The facility became a twin star with the Patterson-Appleton Arts Center, the city’s only non-academic public gallery and permanent collection.

Herbert Holl, who was the executive director of the Greater Denton Arts Council from 1987 to 1994 and 1995 to 2005, said Patterson was the chairman of the search committee that hired him. The first interview for the position was the first day of a long friendship and partnership.

Holl said that even though a year had passed since they last met, he would pick up the phone to hear Patterson say his first name.

“No matter how long it had been since our last conversation, I was hearing, ‘Herbert, do you remember…’ and it was like we just talked last week,” Holl said.

Holl remembered a volunteer and a community leader who could give advice, but also take it. Patterson had “an unrelenting enthusiasm for Denton”, and he was a proponent of cultural development, historic preservation, and the economic development of Denton.

“He had a unique dedication,” Holl said of Patterson. “And when I say he had relentless enthusiasm, it was never blind enthusiasm. He was informed. He could pay attention.

Patterson and his team raised $525,000 to relocate and restore what is now the Bayless-Selby House Museum. They co-founded the Denton County Historic Park, where the house and grounds were opened for tours and programs related to the stately home’s era. The park is now home to Quakertown House, one of the oldest homes in Denton’s middle-class black neighborhood in the early 1900s.

Beyond the arts, Patterson has contributed and led fundraising for many other community projects. Patterson was chairman of a committee to raise money to create the Denton 2 TV station, which was later sold to KERA in Dallas, and he was vice chairman of Friends of WRR, the city-owned radio station. from Dallas. He was one of the founders and co-chairman of the Denton Holiday Lighting Association, set up to provide Christmas decorations for the square and organize the annual holiday lighting festival.

He has served as a board member of the Texas Chamber of Commerce in Austin, Denton Amphitheater Association, Denton Tree Board, Denton Main Street Association, and Denton Chamber of Commerce, among others. He was also a former president and campaign manager for the United Way of Denton County, as well as a former vice president of the Denton State Supported Living Center Volunteer Council.

He helped fund concerts and programs at the University of North Texas College of Music. Patterson has served as the community representative on search committees for Dean of the School of Music, Provost at UNT, and Marketing and Communications at UNT.

He was president of the Denton Chamber of Commerce and received the chamber’s Otis Fowler Award in 1982. He served on the Denton Regional Medical Center Board of Directors.

He was an elder at St. Andrew’s Presbyterian Church and a member of the church since 1972.

The family will receive visitors at 1 p.m. Wednesday at St. Andrew’s. Services will follow at 2 p.m., followed by interment at Roselawn Memorial Park. The service will be streamed live on standrewdenton.com.