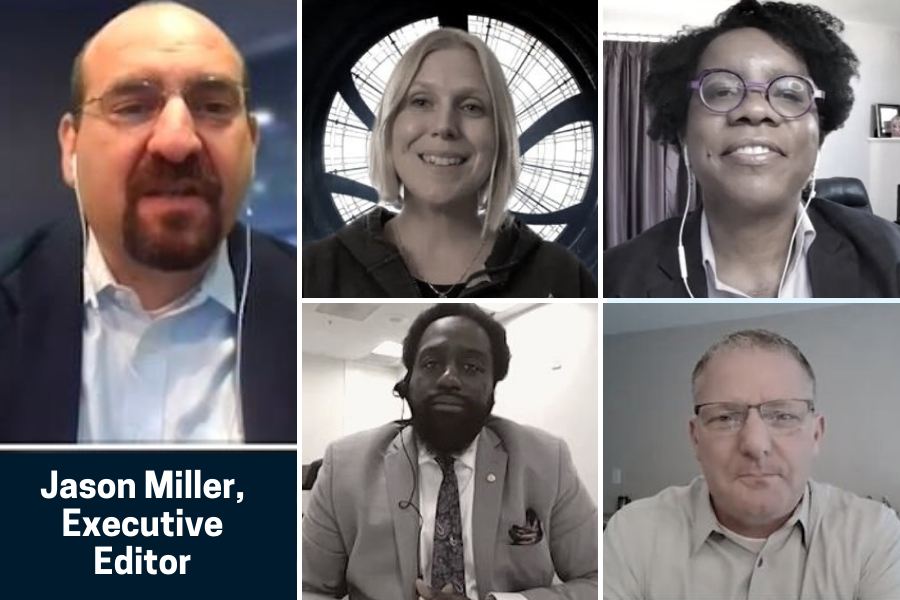 IT modernization and acquisition led the CIO’s discussion in 2021

As I step into my 14e Hosting year Ask the CIO, which is the longest-running program on Federal News Network, the show’s evolution is clear.

It has gone from a one-on-one interview program focused on agency technology managers, CIOs with a deputy CIO or occasional CTO, to one that targets to an assortment of federal executives from the CXO community on technology.

This development was both a conscious decision and one that occurred naturally as technology permeates every facet of federal mission areas.

That’s why it’s no surprise that the top 10 Ask the CIO shows in 2021 covers the entire CXO community. See how they stack up against what was most popular in 2020.

I have to admit I’m a little surprised with this one. Maybe it was the power to talk to former federal tech officials like Mark Forman and Gloria Parker, or maybe it was the title and timing of the interview, released roughly two months before Congress was released. ‘adopts the American Rescue Plan Act with its $ 1 billion for technology. Modernization Fund, or maybe it’s just a recognition that IT modernization continues to be the most discussed topic in federal IT year after year. Regardless, it was the most popular show of the year because it resonated throughout the community.

While the number one show of the year was surprising, this interview with the National Institutes of Health IT Acquisition and Assessment Center (NITAAC) was a shoe to be among the most popular. The acquisition of CIO-SP4 has been one of the most discussed, criticized, protested and acquisition-driven acquisitions of the past year. It will be a story that continues to give in 2022.

The pandemic and the release of Trusted Internet Connections 3.0 use cases have made cloud and cybersecurity a popular topic in recent years. This October 2020 interview has remained relevant and showed that our audience has found it by seeking possible solutions to these ongoing challenges.

This interview was a perfect example of how Ask the CIO has evolved. Sonny Hashmi, the Federal Acquisition Service commissioner in the General Services Administration, is a former CIO, who now heads an acquisition organization. Our discussion at the Coalition for Government Procurement Spring Conference highlighted the interplay of technology, data and automation and the federal procurement process.

This is where Ask the CIO shines, giving generally timid organizations in the media, like the Social Security Administration, an outlet to highlight important and successful IT efforts. It was the first interview with the SSA CIO in almost four years and showed how far the agency had progressed during that time.

If Ask the CIO was like “Saturday Night Live,” Kevin Cox might just hold the record for most appearances. It was clear that the former head of the Cybersecurity and Infrastructure Security Agency’s Continuous Diagnostics and Mitigation (CDM) program in the Department of Homeland Security understood the value of messaging, media and promoting CDM’s success. It was a bittersweet “exit” interview after Cox decided to return to the Department of Justice to be his deputy IT director.

Give Paul Brubaker a mic and you’ll get some of the best quotes of any federal tech executive inside or outside of government today. Another messenger master is Brubaker, one of the original authors of the Clinger-Cohen Act and holder of numerous federal executive positions, in this case speaking of the Department of Veterans Affairs’ new portfolio management approach to capitalizing on the momentum that came from the pandemic. He showed how VA can be flexible, agile, and rapidly deploy new systems and technologies.

This show was another example of the evolution of Ask the CIO. I hosted a panel at an AFFIRM event and it turned out to be one of the most popular shows of the year. This is yet further testimony to the fact that agencies are far from being in place to modernize technology processes and applications. Sometimes all it takes is having the right encouragement to get them to showcase their successes.

Besides the # 1 show, this is the other episode that surprised me by entering the top 10. GSA’s business platforms initiative has not received much attention in 2021 compared to years ago. previous years and the pandemic seemed like the perfect opportunity to prove its worth. The jury is still out on the business platform’s initiative, especially with Congress asking the GSA to test the other two platforms over the coming year. This story will continue to give in 2022.

The top 10 lists end with a recent Ask the CIO interview on the Defense Health Agency and it’s no surprise that this is one of the most popular in 2021. What struck me about this interview, c is how big DHA was and how much Pat Flanders and his team are doing to modernize their technology. DHA consolidates and standardizes to reduce the burden of managing and maintaining some 200 different IT and service contracts.

Shame on NBA if a Spurs-Heat game takes place

Footwear Care Market to See Pronounced Growth in the Period 2020-2027, According to…