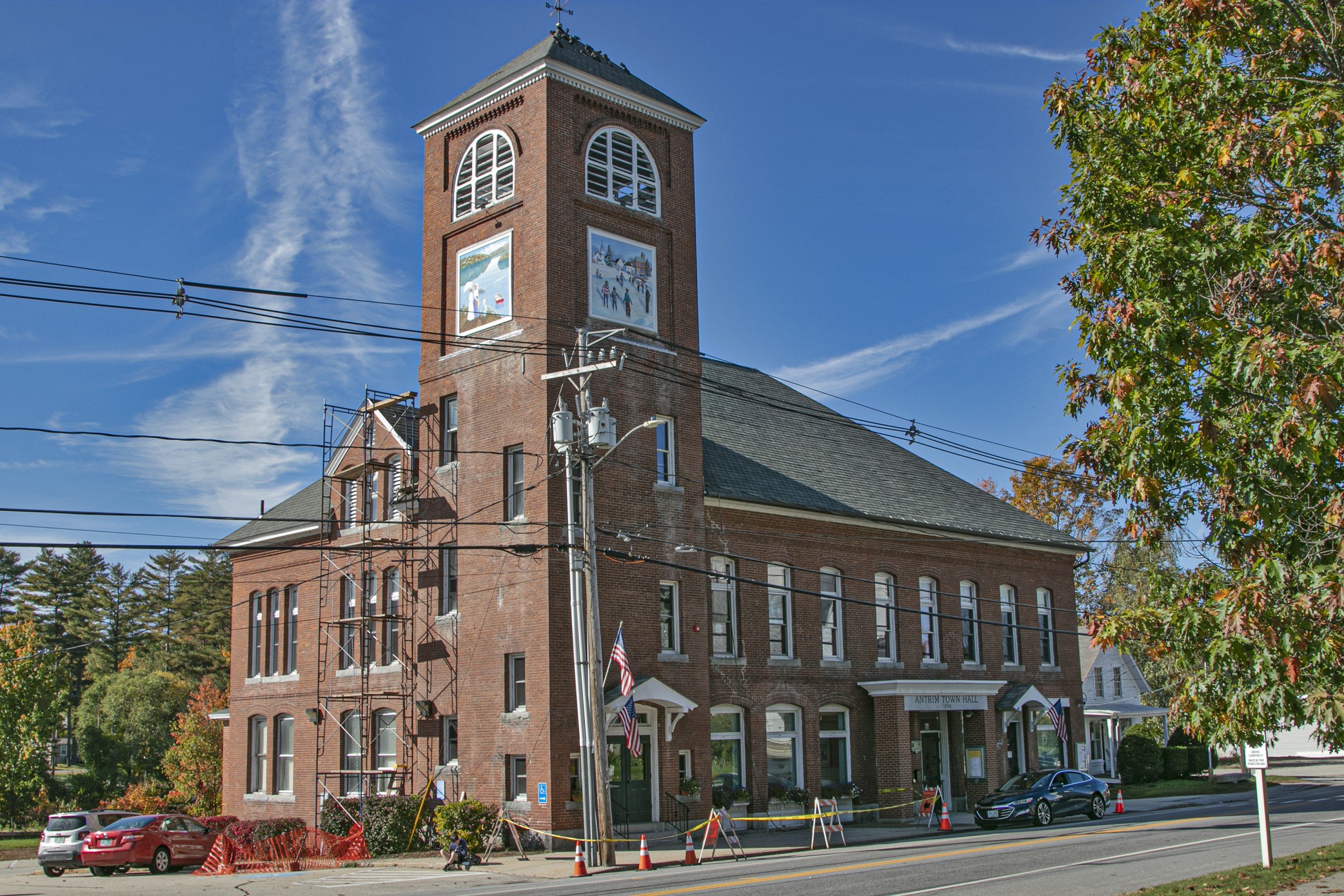 Antrim Town Hall has murals on its tower. Photo by Stillman Rogers

The most visible sign of Antrim, for those of us who frequently travel along Route 9 between Concord and the Monadnock area, is the row of white wind towers circling atop the Tuttle Ridge Line Hill. These turbines, which generate enough energy to power more than 10,000 homes, have also sparked a mega-controversy – opinion in the city is still as divided as it was during the application process.

But most of Antrim is not visible from the busy Route 9. To find its villages (and there are several), we headed south on Route 31 until a scattering of buildings around a crossroads in the geographic center of town. Appropriately, this is the center of Antrim and the site of the original settlement.

The barn room at the crossroads once stood the meeting house, built in 1785, and it stood on top of the hill behind it. The town had only been incorporated eight years earlier, in 1777, and was named after County Antrim in Northern Ireland. It was the former home of landowner Philip Riley, one of the first Scottish-Irish settlers.

Antrim’s history differs from that of most of the early towns in New Hampshire, which were mostly settled by the English. In 1718 a large group of Scottish Presbyterians, who lived in Ireland, emigrated to Boston, and later to what is now Londonderry. From there, smaller groups spread west, one settling in Antrim in the summer of 1844.

Three years after the meeting house was built, around 60 settlers, mostly of Scottish descent, established the first Presbyterian church, holding services in the meeting house until their new brick church was consecrated in 1826. For almost 40 years it was the only church in town, and around it was a store, post office, school, tavern, rectory and several houses.

In 1798 a house just east of what is now Grange Hall became a hotel and tavern; this and local houses hosted summer boarders who arrived in Bennington by train and came to Antrim center by daily bus. The building was replaced in the 1840s by a farmhouse which today again welcomes guests like the Highlands Inn.

In the late 1800s, manufacturing in factories along the Great Brook Falls caused the population to shift to southern Antrim, soon making it the city’s commercial hub. The first mills sawed lumber and ground grain into flour, and at one time more than 20 mills stood between Lake Gregg and the creek’s confluence with the Contoocook. These included, at various times, woolen and silk spinning mills, a shovel factory, a tannery, and spinning mills making shoe clips, hoes, mirror frames, blinds, powder kegs, and furniture. 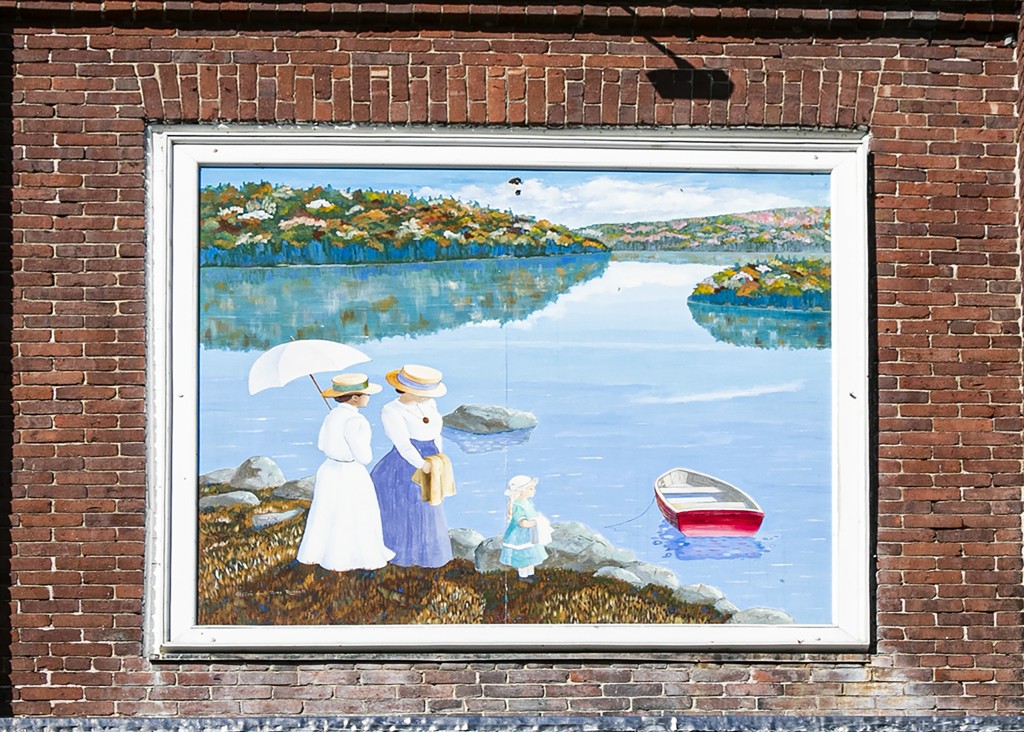 Let’s take a closer look at one of the city hall tower murals. Photo by Stillman Rogers

The Goodell Company was the largest and most sustainable, starting in 1851 with the manufacture of cast iron apple peelers, branching out into knives and other cutlery in the 1870s. It was the town’s largest employer for over of a century.

By the late 1800s, thanks in large part to the Goodell Company, the Antrim center was well established in the South Village. While most of the congregation lived there at that time, the Presbyterians built a new church next to the Maplehurst Inn. A brick town hall was built in front of them.

Today, the dramatic architecture of the First Presbyterian Church, the mansard inn, the town hall (look for the murals on the tower) and the traditional white-
bell tower Baptist Church are the focal point of Antrim. Stretching along Route 31 are two houses adorned with Victorian ‘gingerbread’ fretwork, and the Church of Christ of Antrim, an eye-catching Victorian shingle style with stained glass all around. These, along with the neo-colonial library from 1908 and the remaining brick mill buildings, form a handbook on the architecture of small towns in the late 19th and early 20th centuries.

Meanwhile, back in central Antrim, in 1898, the congregationalists built the cute little Stone church in local field stone and stained glass added. After serving the congregation for a century, it was saved from deterioration by the Rymes family and is now home to the non-denominational ministry At the Cross.

All over town are attractive signs with historical information, and upstairs in the James A. Tuttle Library is the museum of Antrim Historical Society. This active group, along with its other projects (including an oral history archive and a historical catalog of local houses), maintains a collection of journals chronicling daily life here from 1875 to 1951. The annual activities of the company include the reading of the Declaration of Independence at the Kiosk in Memorial Park on July 4.

Not all of Antrim’s factories were on Great Brook. In the old village of North branch, where today’s routes 9 and 31 intersect, this stream had its own mills, and one of them was at the start of one of our favorite hiking trails.

The first mill at North Branch Falls was built in 1798 by one of the settlers of County Antrim and over the years has grown from a saw and grain mill to making buckets and barrels . In 1864 Josiah Loveren bought the sawmills and produced lumber, shingles, and siding. Later owners produced pegs for the cradles, cable reels, and boxes that contained the “talking” mechanism of the Mama dolls. 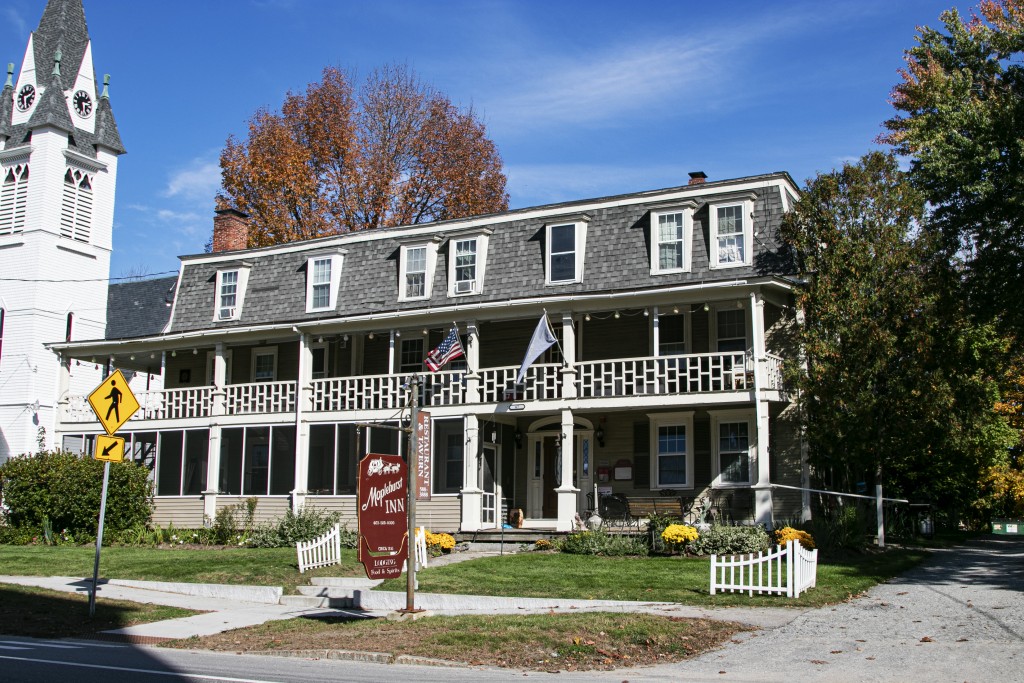 The Maplehurst Inn was built at the turn of the 18th century. Photo by Stillman Rogers

A hiking trail begins near the mill site, near Loveren Mill Road, where the mill foundations as well as the remains of the dam and lock can still be seen. The trail follows the river, then enters the forest to a swamp of Atlantic white cedars, accessible by a boardwalk that overlooks a fragile habitat of sphagnum moss, Labrador tea, leather leaves, snowberry, larch and balsam fir. Such habitats are rare in New Hampshire, and it is one of New England’s finest examples. The trail, maintained by Nature conservation, leads on a three mile loop marked by gigantic glacial boulders.

The Lovern mill trail is one of the three good places to hike in Antrim. Another is the 1700 acres Pierrefeu – Willard Pond Wildlife Sanctuary, where the Tamposi trail passes other giant boulders and up to ledges with magnificent views. The third is the 200-acre McCabe Forest, where two miles of trails wind through woods and open orchards and skirt the many bends and curves of the Contoocook River.

Back on Route 9 near Lovern Mill Road is a roadside stop with large tarp covered items that can confuse passing motorists. Unless they drop by in June when the area comes alive as The Tent, a spot well known to bikers heading to Motorcycle Week. The tent is a safety stop for bikers, maintained by Cornerstone Outreach Ministries Inc., founded and organized by the late “Papa Joe” Delio, a former resident of Swanzey whose name is legendary for bikers. For eight days in June each year, Cornerstone Motorcycle Ministry volunteers donate three hot meals a day, gallons of coffee and homemade cookies to anyone who stops, a lasting memory of Papa Joe.

Buy bestsellers and get freebies now